Many readers wonder where an author’s ideas come from. I’ve often wondered the same myself. In my case, they come from a few places. In the case of the MoonRydr Cycle — and it’s prequel series, the Phoenix Cycle — the original idea came over four decades ago. I had just come out to California from the East Coast, having finally decided that civil engineering was not something I wanted to do for the rest of my life. I was learning how to create illustrations and graphics for other hippies, mostly — rock ‘n roll bands and other alternative businesses — and stressing over a name for my graphics business. I was at a local flea market flipping through some old vinyl albums when the title, Moonrider, leapt out and grabbed me. I couldn’t even tell you, now, who the band was, or if Moonrider was the name of the band or the album. What I do remember, is the image that instantly exploded into my head of a Conan-like warrior, riding in a winged chariot-ish sort of thing, drawn through the sky by a flock of ancient pterodactyl. For several years, I handed out business cards with that image and the name MoonRider Graphics on it. The first one was pretty crappy looking, but the next was much tighter. 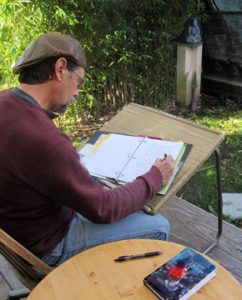 A decade later, I began to run with the idea of a graphic novel, with their elaborate images and minimal storyline, but it stalled at the storyboard stage. Another decade after that, shortly after my parents passed, I tried to write a novel. I pulled out all the old sketches, but, as I mentioned in the ‘About Me’ section, after fifteen years, all I had was a sea of notes and a handful of actual chapters.

The tipping point for me as an author was a combination of hitting a very low point, emotionally, in my life, and a serendipitous meeting with a teacher I had worked with who mentioned the November Novel Writing Challenge. If you’re not familiar with it, it’s a worldwide online challenge to authors and would-be authors, to write diligently each and every one of November’s thirty days. The goal is to write, only — not to overthink, edit or worry about quality — only write your ass off, every single day. It offers the support of a community of others, attempting to do the same. As it happened, it was October twenty-something and I had, luckily, absolutely no time to think or worry. I just let fate pull me along however it wanted to.

That was over five November’s past now, and I haven’t stopped writing since. As I write this, the first draft of eighteen novels and novellas now sit in the ‘vaults’, so to speak. Many of them are well into the edit/rewrite stages. Those you can see in the Available Books section are now ready for you all to investigate. All the rest are in process and will be added to the offerings on a regular basis.

The process for the MoonRydr books was a long, painful ordeal, across four decades. But most of the rest had exploded out of my imagination quite differently. Most of my novellas have been roughed out within the thirty day period of November or June, a regular routine for me now. Others have been written with in others thirty day runs. Some of the shorter books began as a title or an opening line from a growing list I keep on hand, choosing one at random and running with it. But most have come from artwork I had already created. In those cases, those pieces of art are now being used for the covers.

I had always let my head invent backstories, as I paint and after completion, but now I have put that fairly useless mental habit to much better use. The first episode of the Killshot Diaries, came from a Post-it note sketch I had scribbled at three AM, years before. Neptune’s Daughter, Demon Moon, and The Giant Hunter all came out of this odd tendency to imagine a backstory to my illustrations. The cover of the second book of the MoonRydr Cycle, Children of the Forest, was a piece already long finished, that called to me one day. It inspired a pivotal scene between a major character and the woman in the painting, the day I realized who the woman in this old painting could be. She would be the future mother of his children, who also play vital roles in the last book of that series.

At this point, I could no more stop writing than I could stop breathing. If my books delight, entertain or make readers think, I’ve done my job. Either way, writing has changed and improved my life and my attitude towards it, in too many ways to count.