The MoonRydr Cycle tells the story of the descendants of an ill-fated earth colony, later dubbed the Phoenix Colony, the equivalent of an Earth century after the colonists had awoken from a seemingly trancelike state, to find themselves removed from their new life on Terra V. Those ancestors had been deposited by their unseen transporters, on three different continents, separated by a vast planet-spanning ocean. These stories follow descendants of the group, self-named the Beta-faction of Phoenix Colony. Their continent had intelligent, indigenous lifeforms already in residence, both destined to resurrect their fading races, through interbreeding. That directive fostered resistance movements that have gained strength, threatening the survival of both.

This trilogy of books, part of The Phoenix Colony Chronicles, follows those colonists’ struggles to persevere, and the return of the MoonRydr Protectorate, all but wiped from their lands by the xenophobic leader of the Church of the Pure Source.

This is the MoonRydr Cycle. 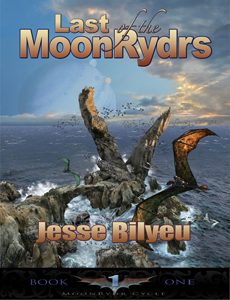 Last of the MoonRydrs finds Jedyah and Ry’anna, fraternal twins separated at birth by fate and the half successful efforts of the elderly and possibly last remaining MoonRydr, Ruben Linz. They are sought by the tyrannical Bishop, Beryl of Rynn, the self-styled Savior of mankind, in this new world. A world where they may be the last vestige of human kind, whose ancestors were early Earth colonists relocated a century before, by a mysterious culture, to a large moon in a far-flung galaxy.

Beryl’s jihad against the indigenous humanoids, the Ly’zarl’ikar, and any human who mated with, befriended or protected them or their half-blood offspring, had raged for decades. Also targeted in his jihad were the MoonRydrs and their BondMates, pterosaurs they rode in defense of the people of the continent, decimated to near extinction in one act of treachery.

Book One of the MoonRydr Cycle follows the separate and disparate upbringing of the two twins, one recaptured and raised, under the Bishop’s watchful eye, by a tough, old sergeant in the militia Beryl has usurped for his jihad. The other is raised by the ancient Keepr of the Reptyl Nation of the decimated MoonRydr Protectorate, in the traditions of his murdered mentor.

The two siblings ultimately meet in a deadly confrontation at Beryl’s Citadel as teens, unaware of their familial bond. 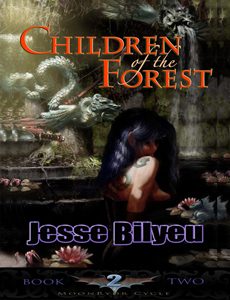 Book Two of the MoonRydr Cycle, Children of the Forest, begins in the aftermath of Jedyah and Ry’anna’s bloody confrontation in the Citadel of the psychotic would-be Savior, Bishop Beryl of Rynn.

Fallen from the Citadel to the angry surf a hundreds of meters below, both are plucked from near death. One by a humble priest who hides the half-drowned girl as his daughter, from the Bishop, who he presumes had ordered her death. The other, by the pterosaur familiar of the SeaWitch, healed within her island cavern. Later, he is sent on an obscure mission, with profound implications for the future.

Presumed dead by Beryl and others, the two siblings continue on very diverse paths that will intertwine in surprising ways as they grow older. Both find themselves deeply connected with the Children of the Forest, the Ly’zarl’ikar, in ways that change them and, ultimately, life on the continent.

The final installment of the MoonRydr Cycle, Shadow of the BronzeMoon, finds Jedyah and Ry’anna as parents, whose fundamental natures are forever changed by the children they raise.

In the aftermath of the Devl’s Jihad, the now-independent crew of the airship Defiant, works secretly with the hundreds of mercenaries left unemployed by the death of the Bishop, now fallen to banditry.The airship formerly used by the deceased Bishop as a tool for his jihad, has become known to the cowering masses as the BronzeMoon, because of its coppery, spherical shape.

Unknown to all, young men and women of the continent are finding themselves drawn to the abandoned mountain home of the legendary MoonRydrs. There the nearly extinct Protectorate is slowly rebuilt when the self-exiled Reptyl Nation returns to the Mountain. The majestic creatures consent, once more, to Bond with young MoonRydr initiates for life, rebuilding theMoonRydr Protectorate. Together with members of the indigenous Ly’zarl’ikar and the children of Jedyah and Ry’anna, they set about the routing out of the mercenary bandit plague and attempt the taking of the BronzeMoon.