The Phoenix Cycle (to be released after the MoonRydr Cycle) tells the story of the descendants of an ill-fated earth colony. Later dubbed the Phoenix Colony, the colonists awake from a seemingly trancelike state, to find themselves removed from their new life on Terra V. No longer on that world, rescued or captured by unknown forces never seen except in their dreams, the colony is deposited on an unknown world, in an uncharted region of the universe. Unsettled as to their purpose now that the original colony has been left behind, they are deposited by their unseen transporters, on three different continents, separated by a vast planet-spanning ocean. Each, seemingly populated by colony members of similar persuasion, develops vastly differing lifestyles. Each continent is also home to other intelligent, indigenous lifeforms already in residence, each race sharing similarities in philosophical ideologies, if not physical characteristics.

This trilogy of books, part of The Phoenix Colony Chronicles, follows those colonists across the first hundred ‘turns’ of the seasons upon that new world. The series was penned after the completion of the MoonRydr Cycle for which it serves as prequel, its origin story.

This is the Phoenix Cycle. 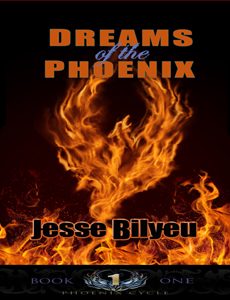 Dreams of the Phoenix
Book One (Phoenix Cycle)

First of the Phoenix Colony Chronicles, Dreams of the Phoenix finds members of Earth’s desperate attempt at colonization of distant worlds, awakening in an odd replica of the colony they had established on TerraV.  Realizing, in time, they had been plucked from their new home by mysterious, unseen strangers—apparently just before their adopted planet’s destruction, by asteroid bombardment—the colonists piece together their new situation from the recollections of dreams they all had while in hiber-stasis. These dreams, they conclude, are the chosen form of communication from their secretive saviors. Disagreement on how to reestablish Phoenix Colony on the new world they are brought to, turns violent.

Then, the colonists awaken planetside, having been summarily divided into three separate groups on three continents. Continents divided by such vast, chaotic oceans, they are virtually segregated for generations to come, free to develop their separate civilizations to their own specifications. But they are not the only humanoid presence on their new world. 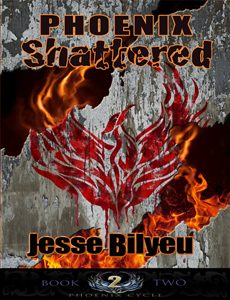 Sequel to Dreams of the Phoenix, Phoenix Shattered details the divergent development of the three splinter groups of the ill-fated Phoenix Colony. The transplanted Earth colonists, rescued by a secretive race of protectors have been separated, apparently according to philosophical ideologies, onto three separate continents of the distant world to which they have been relocated.

Alpha Colony, remaining true to the original Colonial Charter adopted on their departure from Earth, develops an agrarian, biotechnological society. Beta Colony has eschewed technology completely in an attempt to create a resurrection of a Renaissance–like utopia. Gamma Colony has taken the removal of old technology and its drawbacks to an extreme, choosing to live life in as natural a form as possible, adopting a simplified sign language in lieu of spoken or written ones. They live as a simple, nomadic people, building nothing, using only what nature gives them. Unlike Alpha, both Beta and Gamma groups have hidden their one shuttle craft from the original Generational Starship they left Earth in. Those shuttles contain the complete archives of human civilization. Unlike Beta, who use the archives as needed, Gamma group relegates its existence to legend, all but forgotten, in future generations.

All three continents are already home to intelligent species with similar approaches to life as the transplanted Earth colonists placed there.

Its first landfall finds the descendants of Beta Colony, but its first contact is with an unscrupulous faction of rebel warriors. These rebels have used enslaved pterosaurs to give them flight capability, and ultimately commandeer the airship for their own purposes. A journey to the continent inhabited by the third splinter group of the original colonists ends badly.

On return to the content of the descendants of Beta Colony, the ship and its Da’an crew are usurped by the young, deluded Bishop Beryl of Rynn as a trump card in what will become known as the Devl’s Jihad—an attempt to rid their new world of all but those of pure human heritage.